A Brief History of NEQAS

From its informal beginnings in the 1970’s with some 30 UK based laboratories participating in two schemes, UK NEQAS for H&I has continue to grow and develop into the professional dedicated service for external quality assessment. UK NEQAS for H&I now provides 19 EQA schemes to nearly 350 laboratories in over 50 countries worldwide.  It has maintained its core values of operating on a not-for-profit basis, and ensuring laboratory testing quality through continual improvement and education, for the benefit of patients.

The origin of the UK NEQAS for H&I schemes can be traced back to 1975, when the National Tissue Typing and Reference Laboratory in Bristol initiated a quality control scheme for HLA typing and crossmatching to help laboratories in the UK and Ireland compare results. This organisation developed into UK Transplant and today is known as NHSBT-ODT. These initial schemes founded the basis of Scheme 1A – HLA phenotyping and Scheme 2A – CDC Crossmatching, but the exercises also included technical comparisons around comparing batches of complement and the sensitivity of different techniques. 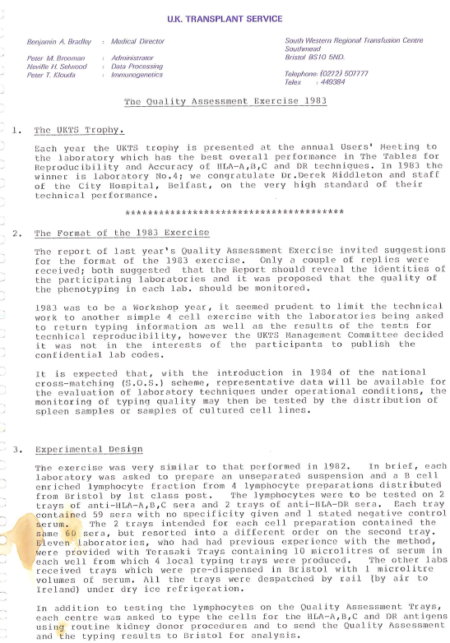 The premise of an annual participant meeting was introduced in these early days for laboratories to come together, discuss results of the quality control exercises and exchange ideas. It was from one of these Participant meetings in 1989 that the idea of a UK professional society for ‘tissue typers’ was formed, and the British Society for Histocompatibility and Immunogenetics was created that year.

1989 was also a significant year, as the schemes become part of the ‘UK NEQAS’ brand, a not for profit consortium of external quality assessment providers created in 1969.

In 1990 Scheme 1B – HLA B27 testing started and the first DNA based HLA typing scheme (4A) was introduced in 1992, initially just for Class II HLA typing, but later included Class I typing.

The new millennium necessitated a new home for UK NEQAS for H&I, as the laboratories at UK Transplant were closed and became purely an administration site. The Service was relocated from Bristol to its current home at the Welsh Blood Service, just outside of Cardiff. The 2000’s brought a period of expansion, with new schemes for HLA antibody detection (scheme 6), B57 testing (scheme 7) and an interpretative scheme for hemochromatosis (scheme 5B), to reflect the changing testing requirements of histocompatibility and immunogenetics laboratories. The first educational schemes were also introduced with unusual or ‘rare’ HLA types being distributed.

2011 saw the introduction of a standalone  2nd field DNA HLA typing scheme (scheme 4A2, previously ‘low’ and ‘high’ resolution typing had been performed under the same scheme), which was further extended in 2018 to include 3rd and 4th field results for next generation sequencing assessment.  This decade also saw the introduction of a further HLA disease association testing scheme (Scheme 8), HPA genotyping (scheme 10) and KIR typing (Scheme 9). A Scheme for MICA typing was also introduced but discontinued after a few years due to lack of participants.

2021 saw NEQAS moving to truly connect with its global participants by offering an online annual participants meeting as well as a series of webinars.

If you would like to now more please click below for a detailed history of UK NEQAS for H&I.